The first is the vigil service, or the Trisagion, which is usually performed at the church the night before the funeral and usually begins around 6:30/7:30 p.m. The Trisagion, sometimes called by its opening line Agios O Theos (Holy God), is a standard hymn of the Divine Liturgy in most of the Eastern Orthodox Churches. The Trisagion is a brief service, no more than ten minutes in length. During this service – as at the Funeral Service the next day – we pray that the Lord will grant forgiveness of sins and rest to soul of the deceased “in the bosom of Abraham” (Luke 16:22-23) with Christ and the saints where “there is no pain no sorrow and no suffering” (Revelation 21:4).

Second, a funeral Service is conducted in the Church as well. Usually funerals begin around 10:00/11:00 a.m. Led by a priest, the service includes prayers, hymns and selected biblical verses on the life and crucifixion of Jesus. The Funeral Service consists primarily of the singing of verses from Psalm 119, a series of hymns on the meaning of life and death composed by St. John of Damascus (676-749AD), Scripture readings from St. Paul’s First Letter to the Thessalonians 4:13-18 and the Gospel of John 5:24-30 and a brief homily/eulogy by the priest.

Third, the burial is done at the cemetery immediately following the funeral and is a short prayer service. It is similar to the Orthodox memorial service done in Church a year following the passing away of the person.

Following the graveside service, it is customary to invite everyone to a meal called, in Greek, the Makaria. The family should decide where will it be held. We have had some in our courtyard at the Church. It can also be held at a restaurant, or someone’s home. St. Basil’s Church can help with caterers or restaurants that we work with. It is our tradition as Orthodox Christians for the main dish at the Makaria to be some kind of plaki (broiled fish). This is because the first meal that the Lord Jesus ate with His disciples following His resurrection from the dead consisted of broiled fish and bread, as recorded in the Gospel of John 21:12-13. This meal is a reminder of Christ’s resurrection and His closeness to those who believe in Him. It is not custom to serve meat at a Makaria.

"I am the Resurrection and the Life. He who believes in me, though he die, yet shall he live." 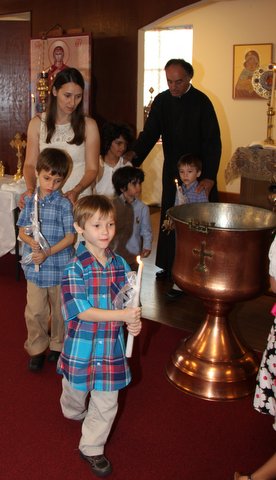 Holy Baptism and Holy Chrismation, two separate and distinct yet intimately-related Sacraments that have been celebrated together since the very early years of Christianity. Immersion in water-along with Chrism, the sanctified oil conveying the seal of the Holy Spirit-define the Orthodox tradition by which the Church opens its doors to new members. Baptisms may not be performed during Holy Week or on any of the Great Feast days of the Lord. For a list of dates, please contact the Church Office.